Egyptian Priests in the Hellenist, Roman and Early Christian time

The Greek historian and geographer Strabon (about 63 B.C. - 23 A.D.) is very disappointed after his visit to the temple of Heliopolis and says in former times the priests there might have been wise philosophers, however now, they are only able to do their sacrificial duties and tell stories about the temple's sights. Nonetheless, the priests of the great temple of Amun in Thebes still fulfill Strabon's expectations.

Clement of Alexandria (about 150-215 A.D.), a Christian who elsewhere condemns the pagan religion and the Egyptian cult, is however full of praise concerning the educational level of the Egyptian priesthood. (Stromateis, Buch IV, Kap. 4).

Politically as well as economically, the priests and temples had lost almost all of their influence by the end of the time of the Pharaohs. Their huge estates were secularized and they received a salary for their services. The Roman emperor Hadrian (76-117 A.D.) centralized the priestly administration under the control of a "High-Priest of Alexandria and all Egypt", who was, in fact, a civil bureaucrat and a Roman. But the more power they lost, the more the Egyptian priesthood cherished their elitism. They intensified the precepts for purification and their formation and first of all, they expanded the hieroglyphic writing into a complex system that could be mastered only after extensive learning and "initiation into the wisdom and secrets". However, there are also examples of illiterate priests in rural, remote communities. Under Roman rule, priests were - on paper at least - freed from manual labor, but they had to pay taxes. For the temple land, too, taxes had to be paid.

Porphyrios (3rd. cent. A.D.) describes an ascetic lifestyle of at least some of the Egyptian priests, which he calls 'philosophers'. The account reminds much of the later descriptions of good Christian monks. According to Porphyry, purification rituals that could last for days were required from every priest. During this time, they had to avoid sexual contact and some sorts of food. In his "Life of Pythagoras", § 12, Porphyry speaks about the education of the priests, especially their formation in the "three types of scripture": Demotic, Hieroglyphic and Symbolic. With the last term, he designates the special cryptographic form of Hieroglyphic writing that was used since the Ptolemaic time.

From the 2nd century A. D. on, the cultural and literary interest of the Roman world in Ancient Egypt intensified, especially the interest in Egyptian religion and its magic element that fascinated the Romans. The focus point for the contact with Egyptian cult and religion became the Hellenized cult of Isis, which spread throughout the Empire and flourished even beyond the introduction of Christianity in the 4th century. In the company of Isis, the inhabitants of the Empire got to know Serapis (a syncretized form of Osiris and other gods and Isis' husband), Horus/Harpocrates, and Anubis.

The literature shows a few examples of "Egyptian Magicians" who are portrayed in the typical clothing and behavior of Egyptian priests and who amaze their surroundings with their tricks, magic, and wisdom. Lucian's "Pankrates" can pacify wild animals - a wonder that in later times, is found often in Christian Saints' lives - and to create servants from lifeless objects. However, those great magicians are shown to use their knowledge to help people and sometimes, are revered as saintly men. Only in the Greek fantasy novel "Apista" (The wonders beyond Thule), the magician-priest is an evil character that uses his abilities to gain power and wealth. He even casts a spell against his victims that makes them drop like dead and unable to live by daylight. Memphis and its subterranean places of cult (Serapeum) is named in several writings as THE location to get proper initiation in Egyptian magic: for instance in Hieronymus' "Life of Hilarion" (Patrologia Latina 23, col. 0347-0420). Cyprian of Antioche - later baptized as well - claims to have learned the black magic in the temples of Memphis and Heliopolis and even witnessed "how the Devil helped men to shapeshift so they could perpetrate their malice unknown".

For the Fathers of the Church, the Egyptians in general are the example of useless superstition and their priests in particular the example of evil magicians who deceit poor believers with their tricks. The Latin Bible calls the priests in competition with Moses characteristically "malefici" - evil doers.

In the magical and alchemical writings of the 3rd and 4th century that maybe have their origin in Alexandria, Memphis is also a place of magic and occult knowledge.

First, the inhabitants of Ancient Egypt saw Christianity more as a sign and method of resistance against the (still pagan) Roman Emperor and State, whose domination they did not like very much. We know many accounts of Christian martyrs in the Egyptian territory and forced sacrifices for the Roman State Cult. In 381 Emperor Theodosius announced Christianity as the official religion of the Roman Empire and thus forbade all still existing pagan rites. However, the devotees and priests did not give up without a fight. This shows the attack on the Temple of Serapis in Alexandria, where a civil war broke out between Christians and followers of the ancient cult. No doubt many families stayed faithful to the old beliefs and costumes and were supported by now job-less priests wandering around the country. But if they were exposed, severe penalties awaited them.

Since the late 3rd century, Upper Egypt was mainly occupied by two tribes, the Nubades from Nubia, and the so-called Blemmyes coming from the Eastern desert. Both tribes were in constant warfare and organized raids in Roman-Egyptian territory. To stop this, the Roman Empire finally paid 'protection money' to the tribe-leaders and allowed them the use of the ancient temple of Isis at Philae. In 452/3 (70 years after the solemn ban of pagan rites in the Empire) the historian Priskus wrote, how the still pagan Nubades and Blemmyes worshipped Isis at Philae and took the statue of the Goddess with them in their country for a procession, before returning it to the temple on the island. So still at this time, the shrine of Isis was intact and cultivated.

In the 6th century, the role of the Blemmyes as a political factor was diminishing, and the Nubades began to accept the Christian faith. Nonetheless, the cult of Isis at Philae still existed, kept alive by some old priestly families of the area. Inscriptions found at the temple give witness to the situation. Therefore, in 535 Emperor Justinian decided to finally end this remnant of ancient beliefs once and for all. The historian Prokopius reports a military expedition to the island of Philae, the demolition of the temple (which can't be true, because we still see the temple of Isis as one of the best-preserved of Ancient Egypt!) and the deportation of the priests and statues to Constantinople. The temple itself was dedicated to the Christian martyr Stephanus. 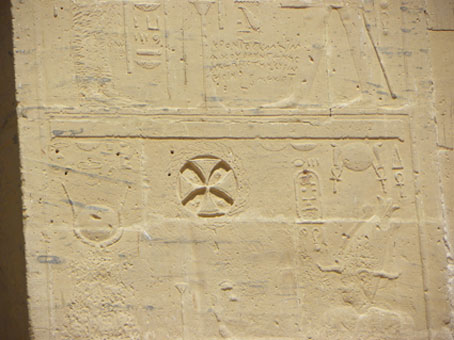 Temple of Isis at Philae. Christian cross on the pylon.

However, this was not yet the last word spoken on behalf of the Ancient Egyptian cults and their followers. At the beginning of the 20th century, the famous Egyptologist Jean Maspero discovered a papyrus (P. Cair. Masp. I 67004), which contains a petition to the provincial governor from officers in Upper Egypt, and was written between 565 and 573. The text talks about a man only named "The cannibal", who is said to have misled members of the Blemmyes-tribe to renounce Christianity and embrace the ancient cults again. He is said to have restored temples and consecrated shrines of the 'demons', and in addition to having a morally corrupted life, to spread civil disturbance and to raid the countryside with his followers. It is hard to say how many of these accusations are true. The author of the account is an educated man and uses theological connotations for instance from the Bible: the fight of the Old Israel against idolatry. Moreover, the connection of 'false beliefs' (= non-Christian beliefs) and 'perverted moral' can be traced throughout the Middle Ages up to Early Modern times in records of cases from the Inquisition, but also in literary works and art. A heretic, an idol-worshipper, simply could not lead a decent life, it had to be a corrupted one. Heresy was a crime that posed the culprits outside of the Christian (and thus human) society, and therefore every action necessary could be undertaken to stop these 'beings'. This was a common opinion. Unfortunately, no sources exist telling us the final fate of "the cannibal" and his followers.

Not only at the isle of Philae, but also in the temple of Amun in the oasis of Siwa, the active cult seems not to have ended before the 6th century. It is probable that Christian missionaries never even reached this remote outpost of Ancient Egyptian culture. Perhaps Amun was worshipped here until the inhabitants of Siwa were conquered by Muslim forces in the 12th century.