Magic and Alchemy in the Middle Ages

During the late Middle Ages and Renaissance up to the 17th century (and beyond in some esoteric teachings), Egypt has been regarded as one of the motherlands of magic, alchemy, and astrology. The Church Fathers of the 2nd and 3rd century followed the simple conclusion that the pagan deities were lifeless idols, perhaps inhabited by demons, and their worshippers thus all evil sorcerers and children of the devil. This view made all pre-Christian cults and rituals evil, even the so-called positive magic. The Church Fathers especially mocked all kind of Astrology in the form that the sun or movements of the stars could have any influence on the fate of a single human or a state. 'Mizrajim' the Hebrew name for Egypt, became the personification of the first magician, who deceived the people with his evil art and taught them to make idols of demons. This legend was transported in various forms throughout the Middle Ages, combining 'Mizrajim' with other infamous figures of the Bible, such as the builder of the Tower of Babylon. The Ancient Egyptian denomination 'Khem' for their country, meaning 'Black' (like the color of the fertile land), was related by the Christian authors to the 'Black Art of Alchemy', and the god Amun was seen as the cursed son of Noah, Ham.

Amidst the negative connotations of early Christian and Medieval authors, only the figure of Hermes Trismegistos stands out, as the greatest pagan witness of the Christian truth.
Already in pharaonic times, the god Thot is said to be the bringer of law, polity, divine service, and of the instructions of temple building. Other texts celebrate him as author/interpreter/bringer of the sacred scriptures, which means teacher of the Hieroglyphic writing, but also the teacher of the Gods' will. The identification with the Greek god Hermes is based on similar attributes and appears for the first time in the 5th cent. B.C. Cicero mentions in his book "De Natura Deorum" Hermes as the bringer of scripture and the law of the Egyptians. Since Ptolemaic times Thot was given the name "Trismegistos", meaning the "Thrice Great". Plutarch (46 A.D. - ca. 120 A.D.) calls in his writings about Isis and Osiris Thot/Hermes the founder of the cosmic order. The special relationship between Thot and magic (Heka) is documented throughout the whole Ancient Egyptian history and intensifies from the New Kingdom on. The "Corpus Hermeticum", accredited to Hermes Trismegistos is a series of magic and philosophical texts, created probably only in the 2nd or even 3rd century A.D. The Christian writer Clement of Alexandria tells, that Hermes Trismegistos is said to have written 42 indispensable books; 36 containing the whole philosophy and religion of the Ancient Egyptians, and the others treatises about medicine. Some medieval authors claim the legendary Hermes Trismegistos came long after Moses, and thus, Moses preceded his wisdom. Others say he was a contemporary of Moses. 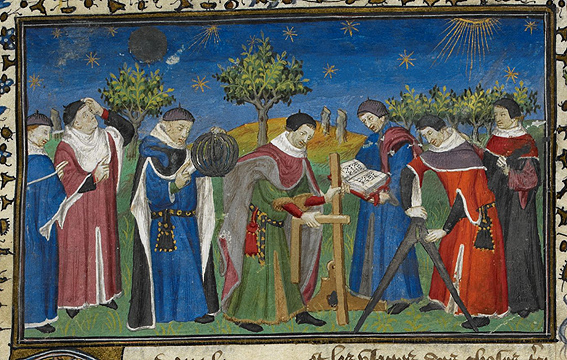 The Bible speaks in the story of Moses and the Exodus of "magicians and sorcerers" (malefici in Latin = the ones who do evil with an evil spirit) as well. In medieval legends, the magicians Jannes & Jambres are portrayed as opponents of the Israelites.

The very popular "History of Alexander the Great" (Alexander Romance), first written in the 2nd century A.D., also transmits many Egyptian elements in fantastic medieval attire. Such as Alexander's supposed shapeshifting father, the magician-king Nectanebus, who flees his country "disguised as a cleric" and inherits a few traits of Egyptian priests despite not truly being regarded as one.

The picture of the Middle Ages and the Renaissance about the Ancient Egyptian priests practising all sorts of magic (and thus were ambiguous or outright evil, because the Christian view of the world condemned magic and sorcery) made its way into the Literature of the 19th century, and therefore very often the priests are on the antagonist's side and have dubious at best, aims.

In his novel "The last days of Pompeji", written in 1837, Edward Bulwer Lytton portraits Arbaces, an ambitious, arrogant, ruthless Egyptian priest and follower of the 'teachings of Hermes Trismegistos' as antagonist. The Polish author Boleslaw Prus depicts in his novel "Pharao", written in 1895, the struggle for power between the Pharao and the priests of Amun-Ra in the 11th cent. B.C. The antagonist Her'hor, High Priest of Amun, is shown as a ruthless politician using his spiritual knowledge and religious rituals to influence the people. Agatha Christie's "Death comes as the End", 1944, is set in the Ancient Kingdom and features the Ka-priest Imhotep, whose concubine is murdered and thus reveals hate, jealousy and greed in the family. In "The Egyptian", published in 1945, the Finnish author Mika Waltari tells the life of the physician Sinuhe in front of the struggle of Akhenaton (who is seen as a sort of prerunner of Christ) against the old religion. The priests portrayed in this novel are more or less faithless, ruthless men, who use their rituals to influence people and mock the Gods they should serve.

Ancient Egypt was a very welcome theme for the Orientalist painters of the 19th century. 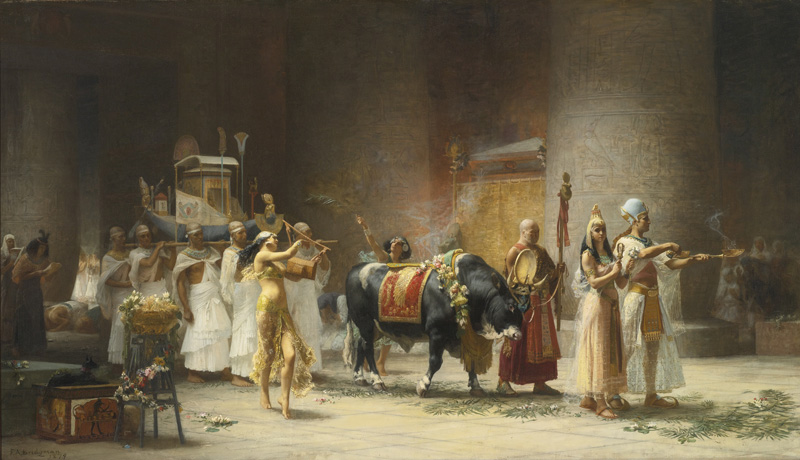 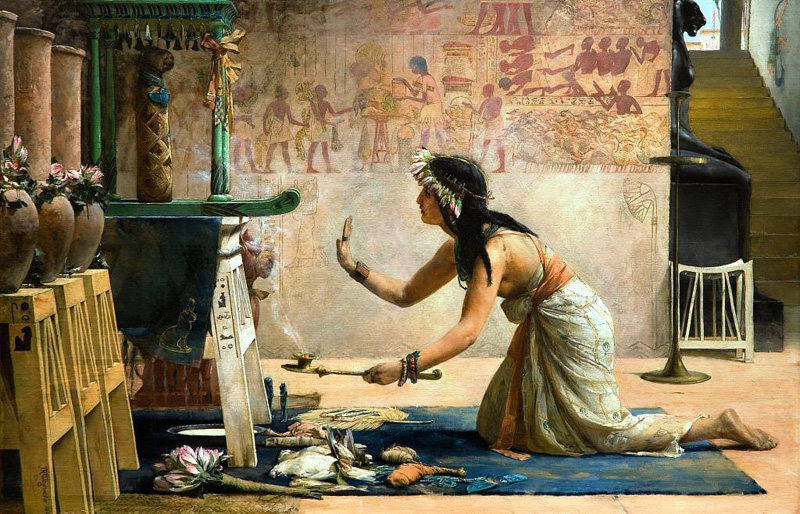 Most movies about Ancient Egypt evolve around three themes: the stories told in the Bible, especially Moses; Queen Cleopatra and horror-fantasy stuff about revived and murderous mummies. As good as nothing can be learned about the real culture and religion of Ancient Egypt, on the contrary. In most cases, not even the names of the Ancient Egyptian characters are Ancient Egyptian. The rituals center around black magic, curses, orgies and human sacrifices. If priests appear at all at a more prominent place in the story, they are often portrayed as evil, power-hungry and against-the-crown-working men.
However, the often rather trashy movies give a good impression about our modern popcorn culture. Sometimes these movies are just fun watching, and yes, in some cases they could ignite an interest in the real Ancient Egypt!
The following movies are some examples…
(used information from: http://www.ancientegyptfilmsite.nl/)

In 1921 a British Museum field expedition in Egypt discovers the mummy of ancient Egyptian prince Imhotep, who was condemned and buried alive for sacrilege. Also found in the tomb is the Scroll of Thoth, which can bring the dead back to life. A young member of the expedition reads the scroll and thus unwillingly brings Imhotep back to life. Years later the mummy sets out to recover the scroll from the archaeologists in order to bring his lost love back to life, too. In order to fulfil the plan, the revived mummy needs a young girl, which can figure as vase for the soul of his beloved. This sets the whole genre in motion - but is rarely reached.

Archaeologists in Egypt discover evidence of the hidden burial place of the ancient Egyptian princess Ananka. With funding from an eccentric magician and his beautiful daughter they set out to find the tomb, but accidentally discover doomed Kharis's tomb first. An Egyptian priest who vowed to guard the princess' mummy takes control of the awakened Kharis to kill the excavation team members off one by one by poison.

Sequel to "The mummy's hand". An Egyptian priest travels to America to reclaim the bodies of ancient Egyptian princess Ananka and her guardian, living mummy Kharis. Learning that Ananka's spirit has been reincarnated into another body, he kidnaps a young woman of Egyptian descent with a mysterious resemblance to the princess. However, the priest's greedy desires cause him to loose control of Kharis' mummy. The writers of this one got some Egyptian gods like Isis and Osiris right, however the props in the temple at the beginning look rather Aztec ...

Based on the finnish novel "Sinuhe Egyptiläinen" (Sinuhe the Egyptian) by Mika Waltari. The "Story of Sinuhe" is an authentic Ancient Egyptian tale. However, Waltari combined it with the events during the reign of Pharaoh Akhenaten. Sinuhe, a poor orphan, becomes a brilliant physician and with his friend Horemheb is appointed to the service of the new Pharaoh Akhenaten. Sinuhe's personal triumphs and tragedies are played against the larger canvas of the turbulent events of the 18th dynasty, and the fight of Akhenaten against the traditional priesthood of his country.

Directed by Cecil B. DeMille

The movie tells the story of Moses and the Exodus in the biblical tradition.

It's a remake of the 1940ies "The Mummy's Hand". British archeologists discover the grave of Ancient Egyptian princess Ananka. But when they open it a bad curse falls on them for having woken up the mighty guard Kharis who was sworn to protect her. Soon they find themselves haunted by the unstoppable living mummy in Victorian England. The movie makers completely messed up Ancient Egyptian common stuff, as they talk about a god named "Karnak", who is depicted as a non identifiably animal in mummy form. Ancient Egyptian religian is portrayed as demanding human sacrifices.

Finally, a historically more sophisticated movie after the novel of Boleslaw Prus from 1897, filmed in Egypt. Well-known egyptologist Prof. Kazimierz Michalowski and egyptian filmer Chadi Abdelsalam were advisors for this production. At the end of the XXth Dynasty the Egypt's might and prestige is sadly dwindling, and foreign invaders are threatening Egypt's borders. Pharaoh's power has been weakened by internal power struggles and the growing wealth and influence of the temples and the high priests. Young crown prince Ramses soon finds himself in deadly conflict with the mighty priests as he tries to oppose their power.

Ancient egyptian mummified Pharaoh Amenhotep is brought back to life by a modern high priest and starts a new life as Assad Bey in Victorian London. To achieve immortality he needs to kidnap young virgins for blood sacrifices.
Spanish version of The Mummy (1932), where the Ancient Egyptians are wicked sadists whose religion is filled with blood drinking and who can casually eat grapes while innocent victims are tortured in front of them. English title: "The Mummy's Revenge".

In Ancient Egypt High Priest Imhotep is tortured to death and cursed for his love to Pharaoh's mistress Ancksunamun and for killing the Pharao. 3000 years later a team of careless and greedy adventurers from America and England find the resting place of this dangerous undead creature and triggers the curse. Imhotep awakes and tries to raise Ancksunamun the same. In order to achieve this, he needs the stolen canopic Jars and several human sacrifices. The adventurer Rick O'Connel and the librarian Evelyn Carnahan are out to stop him, together with the old secret guard of the Medjai. It is often suggested that this film is a remake of the 1932 film "The Mummy" with Boris Karloff, but Sommers also used inspiration from the other mummy movies.

Sequel to "The Mummy" (1999). Some cult followers and a corrupt curator raise the cursed Imhotep again to have him defeat the mythical Scorpion king's army and then conquer the world. Rick O'Connel, his wife Evie and the Medjai must save their kidnapped son and the world once again in Egypt. Besides Imhotep, a lot of living mummies sped around and try to kill the adventurers.

A group of students discover an Ancient Egyptian tomb in the Southern California hills. The Egyptologist who comes to investigate, discovers the remains of the evil priestess Aneh-Tet and unwittingly brings her back to life. Once raised, she awakes an army of the undead to fulfil a prophecy that will give her the power to rule both the dead and the living.