(special thanks to the members of www.blue-semiramis.de! Pictures by A. Napp, if not other noted)

At least since the New Kingdom, some initiation rituals were part of the introduction to priesthood, involving with high probability vows to keep purity, not to take advantage of the office, and perhaps obedience to the superiors. Some scientists believe, that the 42 "Declarations of Innocence" written in the Book of the Dead are actually such vows from the initiation ceremony. The recently discovered "Book of the temple", written in Middle Egyptian and probably already dating back to the Middle Kingdom, tells us - as far as can be read in the fragments - of such vows. Amongst other things, the candidate had to attest he has committed no murder. Becoming a priest in Ancient Egypt was an initiation similar to the one undergone by the deceased during their journey through the "underworld". It was a transition to the sphere of the gods and eternity. That initiation became the central part for all followers of the cult in the Graeco-Roman Mysteries of Isis (told for instance by the Roman poet Apuleius).

In some later texts from the 21st/22nd dynasty is written from an "Introduction to the God" for the high ranking priests, which might be some special "higher ordination". But this was already the time of the "God's State", when the High Priests of Amun had taken control of Upper Egypt. In some cases, priests choose names with special connection to the god, whom they served, for their children; or adults perhaps changed their names, when they entered the temple-service.

From the third Intermediate Period on, priests had to live within the walls of the temple. In the Late Period and during the Graeco-Roman time, the priests defined themselves more and more as an elite of knowledge and keepers of sacred traditions - probably in order to compensate the loss of real political power under the foreign rulers of Egypt. Education and purity became even more important than before and the rules became more detailed and sophisticated. So to speak, the Egyptian temples and their priests formed the very embodiment of Egyptian culture and religion. The Egyptologist J. Assmann calls that a "clericalisation of the Late Period".

During their service in the temple all priests had to observe special purification and cleansing rites. Among them, ablutions and baths (according to Herodot, twice at night, and twice at day), and sexual abstinence. Diodorus Siculus (1st. cent. B.C.) tells that the priests only were allowed to have one wife, while all the other Egyptians could have 'as many as they wished'.

Chairemon (1st. cent. A. D.) transmitted by Porphyrios (3rd. cent. A.D.) describes an ascetic lifestyle of the Egyptian priests The account reminds much of the later descriptions of good Christian monks. According to Porphyry, purification rituals which could last for days were required from every priest. During this time, they had to avoid sexual contact and some sorts of food; they avoided to laugh, held their gaze lowered. Everything they did, had an allegorical meaning. Strenghtened by this ascetic lifestyle, they fulfilled not only the daily and nightly duties in the temples, but devoted themselves to arithmetic and geometric speculations and philosophy. They didn't like to leave Egypt, because of the luxury and temptations waiting in the world outside. Because of the fact that Porphyry wrote in the 3rd century A.D., we cannot simply conclude his account is valid also for the earlier centuries, moreover for the Middle and Old Kingdom.

Inscriptions, bas-reliefs and modern research on mummies give a good picture of the alimentation prescriptions, the actual situation and the health of the priests. Because they got their share in the (in most case very opulent) offerings for the gods after the rituals, their alimentation was rather good, at least in the great, rich temples. A lot of bat-baked bread, cakes, milk and roasted meat was part of the offerings. Thus, a team from the University of Manchester examining the mummies, discovered some 'modern diseases of affluence'. Nonetheless, there were times of scarceness and hunger, too. 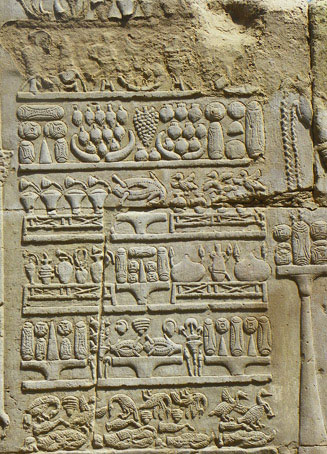 The Greek historian Herodot (5th cent. B.C.) wrote that no "products of living animals" must be worn in an Egyptian temple (book II, 81). This meant wool in particular. So they had to cloth in linen and wear sandals made of papyrus. There is no particular costume in the Old and Middle Kingdom. From the New Kingdom on we know elaborate skirts and dresses, similar to the ones which can be found in the representations of the Egyptian upper class. The "cheriheb" (=lecturer) can be seen often with a linen sash over their chest, and sometimes he is portrayed with two feathers in the hair. 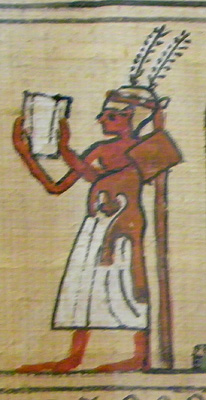 Diodorus Siculus (1st. cent. B.C.) tells a legend explaining the use of feathers by the lecture priests: this is done, because in ancient times, a hawk brought them a book wrapped with a purple twine, holding all the regulations for the divine service. 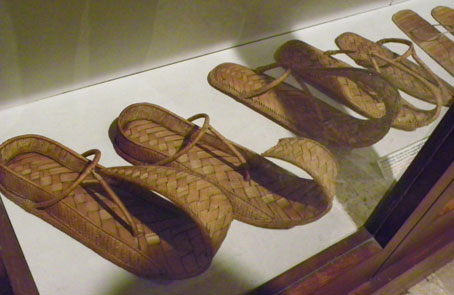 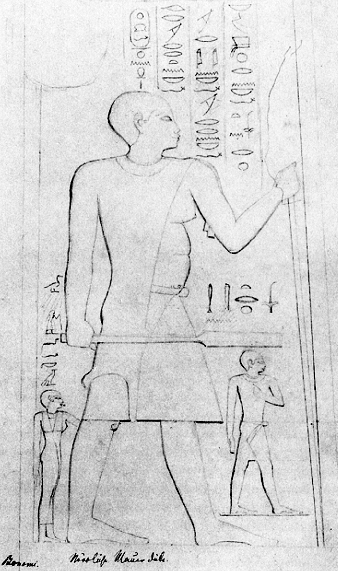 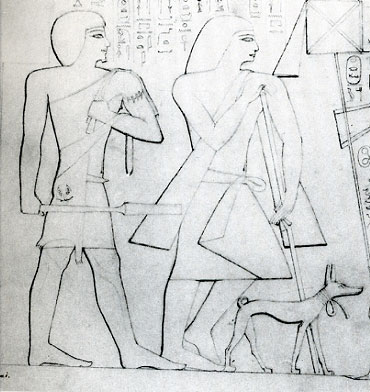 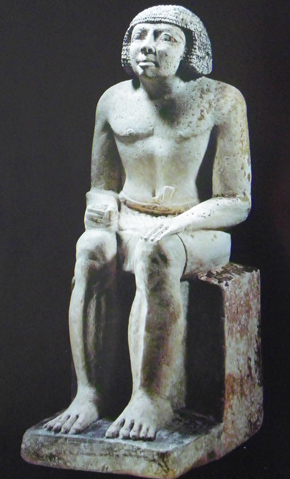 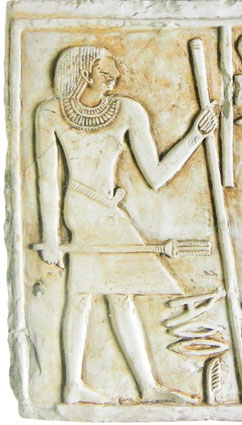 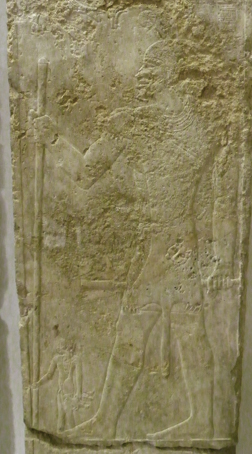 Priest with leopard skin and ceremonial sceptre, probably a Sem-priest, on a false door of a tomb (Ancient Kingdom, Turin, Egyptian Museum) 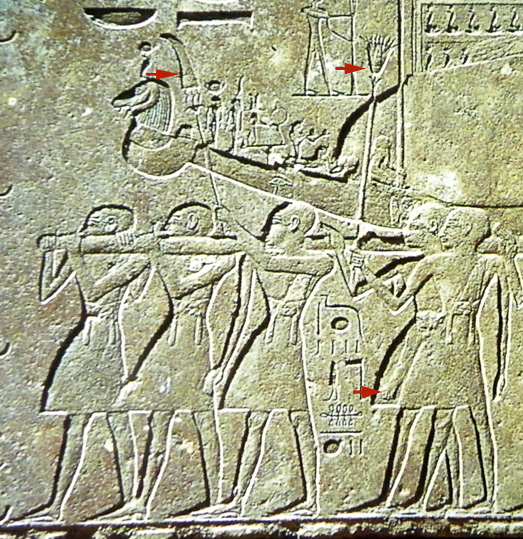 Detail from a procession scene, 15th cent. B.C (Red Chapel of Queen Hatschepsut, Karnak). The priests, even the high ranking ones, are still clothed in short skirts with a sort of wrapped sash. The one in second row underneath the shrine wears a leopard skin (arrow), and two others sceptres, with a papyrusflower and the ornament of a feather (arrows). 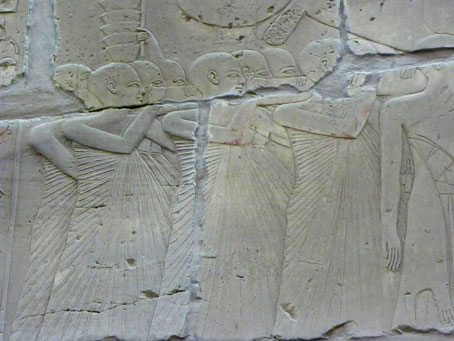 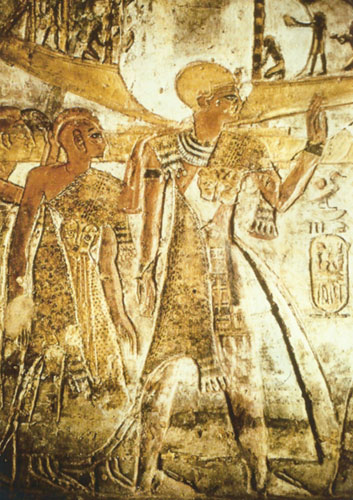 A priest with a papyrus scroll in his right hand; on his skirt the first words of a prayer to Osiris (Middle Kingdom, Pelizaeus-Museum Hildesheim, Picture: Das Geheimnis der Mumien (Kat.)) 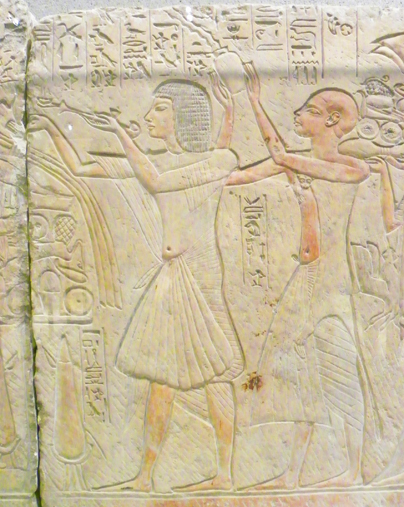 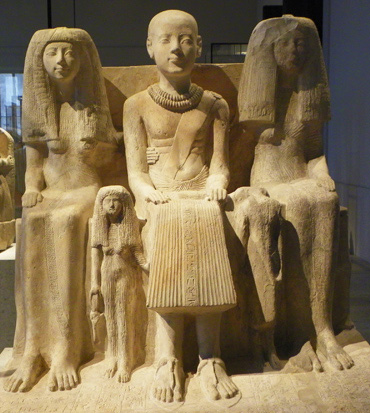 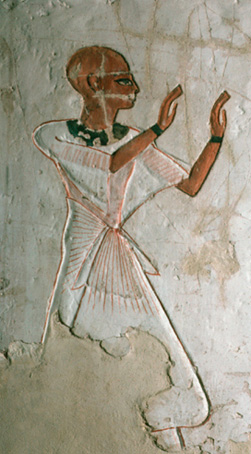 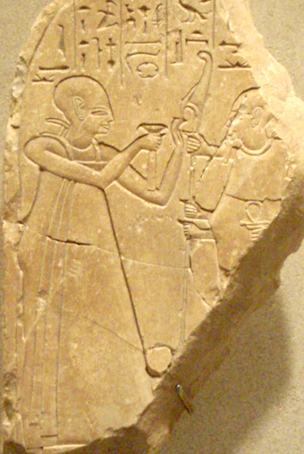 Neferenpet, High Priest of Ptah of Memphis and Vizier, 13th cent. B.C. (New York, Metropolitan Museum). He wears a simplier garment and some sort of skirt.) 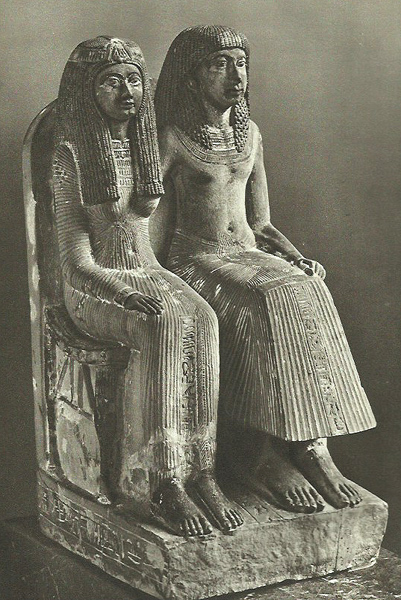 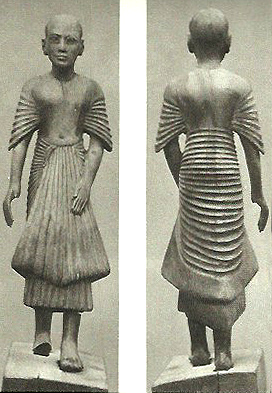 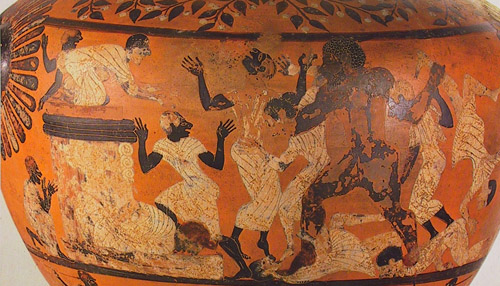 Priests of Osiris, Szene from the legend of Hercules: The fight against Busiris (Caetaner Hydria, about 530 B.C., now in Vienna) 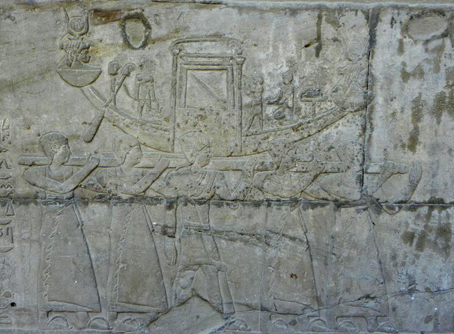 Barque Procession Graeco-Roman period (Temple of Horus, Edfu). Note that they now wear cloths with fringes and some sort of hat. 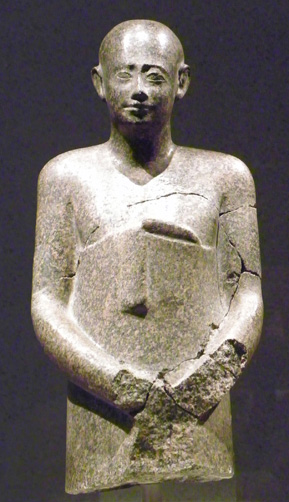 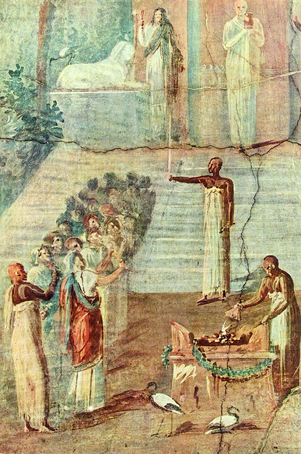 Isis worship (Frescoe at Pompeji, 1st century B.C.). The cloths nearly match the ones represented in the procession scene above. 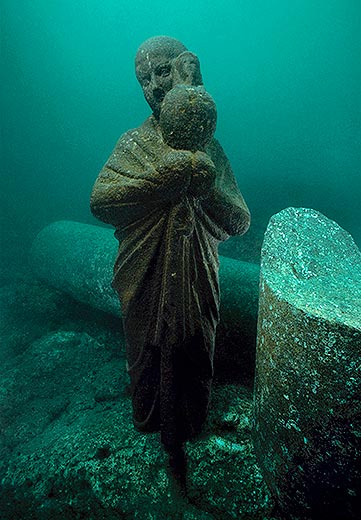 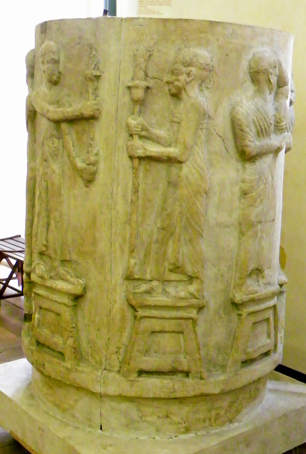 Procession of priests, perhaps 4th cent. A. D. Attention at the laurel on their heads! (Column was found in Italy, today: Turin, Egyptian Museum) 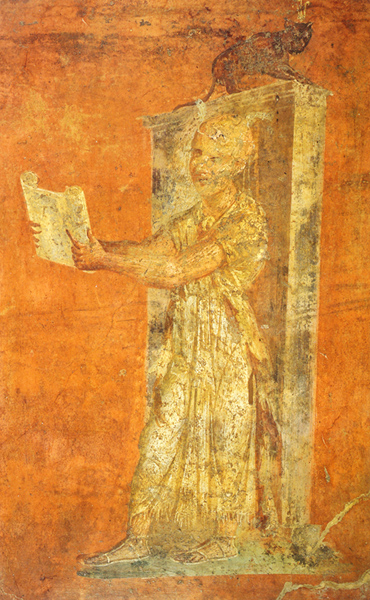 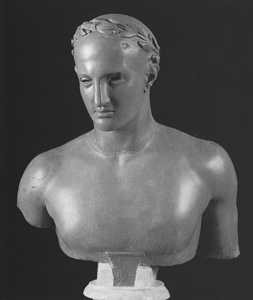 The high ranking priests wore sashes, probably with gold ornaments similar to the ones the Pharaoh used, and a leopard skin. The leopard was considered a sacred animal, personification of the ancient sky-Goddess Mafdet. Perhaps the spots on the skin reminded the Ancient Egyptians of stars. Artificial leopard cloths had star-shaped items on it for the spots. A leopard skin was also seen connected to the beliefs of regeneration and rebirth in the afterlife, and with sun-God Ra. This can be traced back to the pyramid texts of the 5th dynasty. So in particular the Sem-priests, who had to perform the rituals of inspiriting the mummy before the funeral, wore this special garment, but also the deceased person! It can be seen as some sort of christening robe. Apart of the sash, they do not wear any jewellry.

Leopard skin - real ones or imitations?

It might have been an imitation in some cases, a respective item has been found in the tomb of Tutanchamun. But it could have been just grave furniture like other imitations given the deceased, the Ushebti, for instance. In any case, already the expition of Harkhuf (around 2225 B.C.) to the kingdom of Jam - probably situated in Upper Nubia or even further south - aquired leopard skins amongst other things. And leopard skins were part of tribute payings from Nubia and also brought back in high quantity from Hatshepsut's expedition to Punt.

Most informations about personal piety and relations to a specific god we do have from the late New Kingdom and the Greek-Roman time. The "Voyage of Wenamun", which describs the journey of a priest of the temple of Karnak to Syria or the inscriptions in the tomb of Petosiris provide literary examples. Iconographic examples give these statues of donators:

From the 1st millenium B.C. on, many statues of donors found in temples are decorated with images from gods and goddesses, that are placed directly onto the statue's body. It has been discussed that those might be references to tattoos or embroideries on the clothes, but there's no evidence. The background of these images is the belief of building a direct contact between the statue (or better: owner, represented in the statue) and the deity. Other images might have been similar to amulets used in the funeral rites. The representation of scenes of the cult can be seen as the wish to perpetuate those cultic rites into eternity.

Caring for the afterlife

High ranking priests often held other political or military posts in addition to their office. They were important persons of the Ancient Egyptian society, and that status is reflected by their tombs and sarcophagi.

The requests found on stelae and in tombs, asking for prayers and offerings for the Ka of the deceased, do not differ much from those of other high ranking officials or members of the court.

A request from the 6th dynasty:

A request from the 26th dynasty (now it had become important to note the priestly lineage and it is the God himself who gives the goods, not the people living in the future:

During the 3rd Intermediate Period - the Theban Theocracy - mummies of members of the temple-community were equipped with special insignia showing their status and rank, such as two crossed leather braces (known from images of mummy-form Gods such as Osiris) and a so-called Menchet tassle. 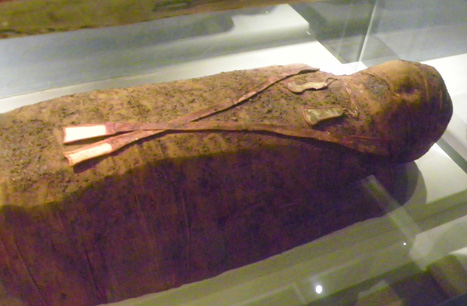 Mummy of Chonsu-maa-teru with specific insignia of his priestly status, about 900 B.C. (Hamburg, Musuem für Völkerkunde) 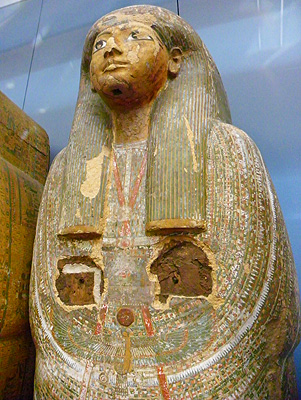 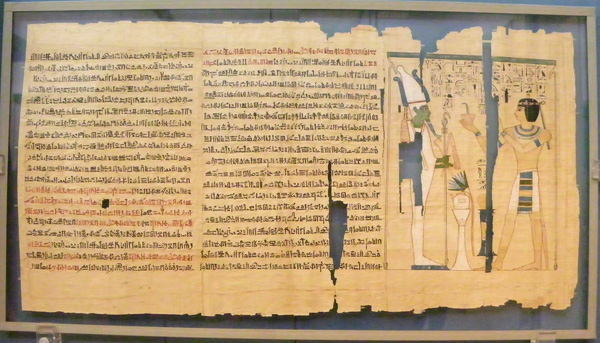 Detail of the Book of the Dead of Pinudjem II, High Priest of Amun about 990-969 B. C., Deir el-Bahri (London, British Museum)

Coffins were recycled - in priestly circles as well as in secular ones. This is the sarcophagus of the last God's Wife of Amun before the Persian occupation, Ankhnesneferibre, about 530 B. C. In Roman times, the priest Amenhotep-Pimentu used this sarcophagus and replaced the name of the princess and the female pronouns. (London, British Museum): 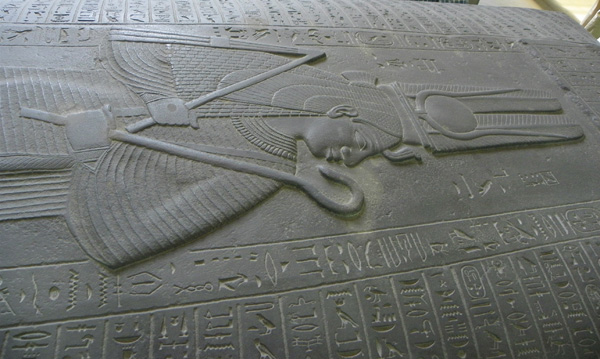