(Photos by A. Napp, if not noted otherwise)

The oldest sanctuaries of Ancient Egypt, of which we can see remains still today, are the temples of Gizeh (4th Dynasty) and the suntemples of Abu Gharab (5th Dynasty). A pyramidal complex consisted of two temples: the valley-temple with access to the Nile, and the temple of the pyramid itself. Both buildings were connected with a processional alley. 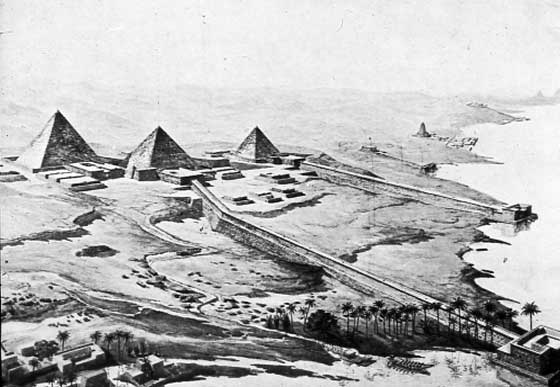 At the time of King Chephren (2520-2494 B.C.) the floor plan of a royal temple had been already established: there was an entrance hall, then a courtyard with columns, followed by a covered area with shrines or niches for the statues of the king, the main sanctuary, and of course storage rooms. At this time, there were no inscriptions or bas-reliefs on the walls yet. 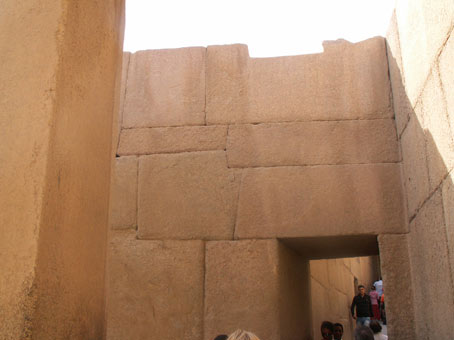 Valley temple of King Chephren, next to the Great Sphinx.

Sun temples are only known from the time of the 5th Dynasty. The one built under King Niuserre (2416-2388 B.C.) could be virtually reconstructed and shows a plan similar to the pyramidal complexes. They possessed a valley temple, which was connected to the main sanctuary with an alley. A huge bilevelled obelisk stood in the centre of the main sanctuary.

The altar stood under the open sky, in front of the obelisk. However, many provincial temples in the Old Kingdom did not follow a fixed architectural plan. From the Middle Kingdom time, only a few temples have survived, too, because the sites were used for buildings in later times. One of the rare still partly existing/reconstructable sanctuaries is the funerary temple for Mentuhotep in West Thebes (21st century B.C.), situated next to the famous temple for Hatshepsut. And like Hatshepsut's temple, it had been a terrace construction with columns at the front. The so-called "White Chapel" in Karnak, dedicated by King Sesostris I. (1971-1926 B.C.) is another example of a temple building at this time. The floor plan shows a rectangular building with a small hypostyle hall in front, the sanctuary, and annexe chambers in the back. Sometimes a courtyard was built in front of the hypostyle hall. Since the Middle Kingdom, bas-reliefs and inscriptions were used at the inner and outer walls of the temples.

Temples in the New Kingdom 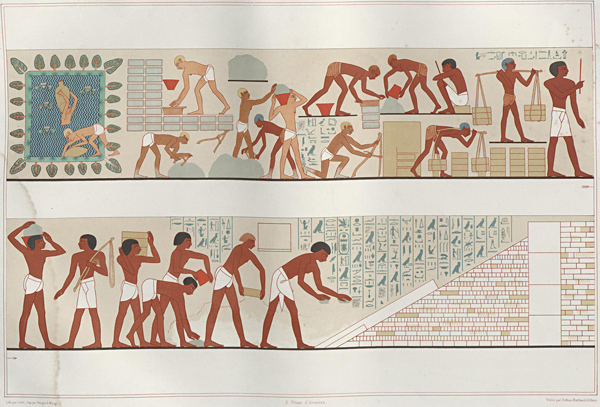 The directives for temple building in the New Kingdom can be found in the "Book of the Temple". Generally, the temple consisted of at least one pylon - the gate - followed by a huge open courtyard, which was enclosed by colonnades on both sides. A canopied hypostyle hall followed, after that, the sanctuary and different chambers (for affiliated Gods and Goddesses, for the altar equipment and offerings). Often, crypts were carved into the soil below, and on the roof of the temple were chapels, which housed the holy statues of the temple on Newyearsday. To the temple belonged shrines for the holy barques and often a so-called Mammisi, a birth-giving-house, which was connected to the rites of the divine family honored in the temple, and with the divine parentage of the Pharaoh. Outside the actual temple building, there was the holy lake for the ablutions of the priests and the equipment for the rituals, furthermore a treasury, workshops, the temple school, an archive, and the accommodations for the priests. All the walls were covered with colorful inscriptions and bas-reliefs, on the outside and inside of the buildings. The colors are visible still today on some parts and were even more impressive when the temples were rediscovered in the 19th century. In the courtyard of the temple stood not only statues of the King (which still can be seen at Luxor and Karnak today), but hundreds of statues of other people, priests, and nobles. The Ancient Egyptians believed, the 'Ka' of a deceased person, the lifeforce, would come back and inhabit the statue representing him. Therefore, every statue in a temple was a small sanctuary on its own. On the statues were inscriptions, which asked the passing people for prayer and the reciting of the offer formulas on behalf of the deceased. Statues of venerated persons were considered as intercessors, just like the Saints, Statues of Saints or Saint Mary or Icons in modern-day Orthodox and Catholic Christianity. On the statue of Amenhotep, son of Hapu, which was standing in Karnak, people could read the inscription "People of Karnak, who you want to see Amun: come to me, I will communicate your wishes". Next to some statues, inscriptions of pilgrims were found. Most of these statues today can be admired in the Egyptian Museums of the world.

The whole area of the temple was enclosed with an adobe wall. In some cases, an alley of spinghes leads to the Nile, where the landing place was, or a little chapel.

Changes in the Late and Ptolemaic Period

The traumatic experiences during the Persian occupation and, after the country's conquest by Alexander the Great in 332, the replacement of the former political elite with Greeks, made the temple even more the "cultural memory" of the Egyptians, that was supposed to preserve Egyptian culture from outside influence and from oblivion. That thought of preservation was not only expressed in the daily rituals inside the temple, but also in its building plan, the decoration of the walls in an almost encyclopedic manner (with geographical, etymological, legal texts) and the increase of cryptographic-calligraphic scriptures. The temple of Horus at Edfu is said to be the best realization of that "master plan". Many temples had their own myths about their origins.

In the Ptolemaic era, we know about people who "gave" themselves to a specific temple in order to receive spiritual benefits as well as economic safety in troubled times. They donated their posessions and took residence within the temple area. The custom is not unlike from medieval affiliation to a monastery. 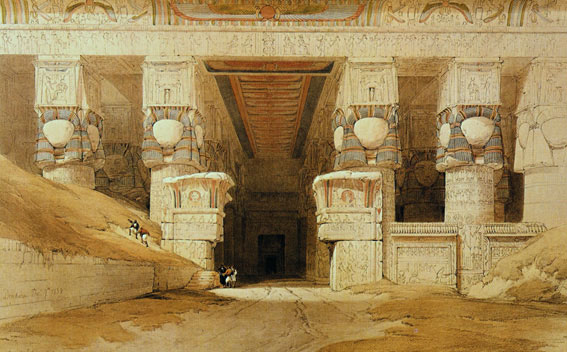 Temple of Hathor, Dendera with its rich colors, as seen by David Roberts 1838/39.

Reconstruction of different temples (by Altair4.com-Media):

The symbolism of the temple and the rituals performed within secured the continued and orderly existence of the world. Plus, the Temple protected the Holy knowledge. That there were secrets that had to be guarded against profanation was part of the Ancient Egyptian religion from the very early times on. A temple in Ancient Egypt was the pivot between the world of the living and the world of the dead, between past, present, and future. Its building mirrored the creation and a world in order. The design of the entrance already reminded on the hieroglyph for 'horizon', the place of sunrise. The columns of the hypostyle hall with their papyrus shaped capitals and the adequate painting symbolized the creation from the primeval ocean, and also the fertile valley of the Nile. The roof of the temple was decorated with stars on a blue background, symbolizing the night sky. Representations of a winged sun disk along the axis of the temple from (in most cases) the East to the West show the daily way of the sun. The ground level rises in most temples, the farther one gets inside, the closer to the sanctuary. At the same time, the height of the singular rooms decreases. At the shrine of the God, the two axes from the ground and the roof virtually intersect: the God is the one who connects both spheres. That assorted sphere of the temples had to be protected from the outside, by the King.

Travelers in Antiquity about the Egyptian Temples

The Greek geographer Strabo (about 63 B.C.-23. A.D.), who described the typical plan of an temple with its alley of sphinges, can only shake his head about the "adoration of senseless animals" inside. The halls of columns are for him not beautiful at all, but show "useless work" (Geographica § 28).

To Clement of Alexandria (about 150-215 A.D.) the riches and decoration of Egyptian temples are the bad exemple of exterior vanity; and as a Christian, he laughs about the cult for snakes and crocodiles.